Dr. John Garcia III is currently President of the Greater Los Angeles Education Foundation. Previously, he was the Senior Program Officer for Education at the California Community Foundation.  John has served as a consultant for the National Governors Association, Jobs for the Future and the Southern Regional Education Board. He was also a policy analyst for the White House Initiative for Educational Excellence for Hispanics and resident fellow at the Bill and Melinda Gates Foundation. John began his career in education as a school counselor after working for Intel Corporation and Jet Propulsion Laboratory and founded the Arizona College Access Network at the Arizona Commission for Post-secondary Education.

John received his bachelor’s and master’s degree from Arizona State University. He received his doctorate in education leadership from the Harvard Graduate School of Education. John is currently a board member of Grantmakers for Education, Social Venture Partners Los Angeles, and the New York Leadership Academy. 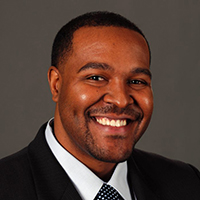 Steven Purcell is the Director of Strategic Partnership at the Greater Los Angeles Education Foundation.

Previously, Steven was the chief of staff at Bellwether Education Partners. Prior to his role at Bellwether Education Partners, he was the director of college partnerships at the KIPP Foundation where he led a team keenly focused on supporting KIPP Alumni in their pursuit of postsecondary attainment. Before this position, Steve was a program and policy development advisor at the Los Angeles Unified School District (LAUSD) where he led the development and implementation of a district-wide performance management system. His work has been instrumental in stewarding LAUSD towards meeting its district performance goals and building capacity within central office departments to make the shift from a compliance culture to a performance culture.

After completing business school, he was accepted as a Broad Resident in Urban Education and spent the two years of his residency in the San Francisco Unified School District. He then spent ten years dedicated to working to improve our public education system through his strategic, analytical, and operational expertise.

Steve has a BS in industrial and systems engineering from the University of Southern California (USC) and an MBA from Pepperdine University with a concentration in entrepreneurship. Finally, he is pursuing a doctorate in education from Loyola Marymount University.

DIRECTOR OF DEVELOPMENT AND EXTERNAL ENGAGEMENT

Sam Gelinas is the Director of Development and External Engagement at the Greater Los Angeles Education Foundation.

Previously, Sam was the Senior Vice President of Strategy and Partnerships at Educational Facilities Group, a Los Angeles based firm that led the development of permanent campuses for public schools in California. Prior to that Sam was the Chief Program Officer at the LA Promise Fund, where he oversaw a diverse portfolio of work that addressed issue areas including arts education, girls empowerment, career readiness, college access and success and family engagement. Sam started his career as a Special Education teacher in the Washington, D.C. Public Schools.

Sam received his BA in Sociology and Psychology from Pitzer College. He holds a master’s in education from George Washington University and a MPP from the University of Southern California.

SPECIAL ASSISTANT TO THE PRESIDENT

Kristina Romero serves as the Special Assistant to the President of the Greater Los Angeles Education Foundation.

Previously, Kristina served as Manager of Education and Workforce Development at the Los Angeles Area Chamber of Commerce and its strategic affiliate UNITE-LA. There, Kristina led L.A. Cash for College, the region’s largest financial aid literacy and college information campaign. In addition, Kristina engaged the local business community, K-12 partners, government agencies, and other civic groups to advance financial aid policy reform at the state and federal levels. With a firm grasp of both practice and policy, Kristina advised the L.A. College Promise partners on ways to better address students’ unmet financial needs.

Kristina earned her bachelor’s in education and psychology at Brown University and her Master’s in Social Work with an emphasis on community organization, planning, and administration from the University of Southern California.